Such Great Hope is Spring 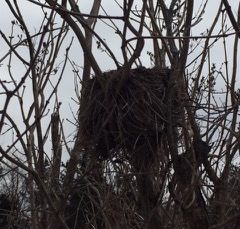 Guest Post by Linda Atkinson
Linda Atkinson lives in Hardwood Lands, Nova Scotia. From her home there, and influenced by her years as a camping enthusiast and recreation professional, she enjoys observing and playing in the natural world.

Late last spring, from my kitchen window, I noticed robins on my deck railing. After full minutes of head swivelling surveillance (by the birds, not me), they would dodge hastily into the lilac bush. With my razor sharp mind, I quickly deduced that a pair must be nesting there.

With stealth, I confirmed my deduction. I enjoyed their comings and goings. I never saw the little ones, but did find the tell tale blue eggshells on the ground. I changed my lawn mowing pattern to avoid the bush, did not pick or deadhead the lilacs, and generally did what I could to be a kind and supportive landlord.

In late summer it became clear the nest was empty and its tenants gone. Life in the backyard returned to normal and this little spring and summer novelty was forgotten. 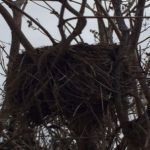 In the fall, the leaves dropped off the lilac bush and the nest became visible. I was reminded of that brief time Nature trusted her tiny beings with me. I had a close up peek at the nest. I marvelled at the engineer’s mind that was able, through instinct and ingenuity, to fashion a home from mud, twigs and assorted components. It must have filled with rain at times through the fall, but firmly retained its “nest “ shape, showing no signs of weather induced wear.

As winter settled in, I hung a suet ball in the lilac shrubs. The suet-ball-watching let me see the nest every day. The branches were bare and stark as winter advanced. The nest was a testimony to how well chosen the site was. (How did the birds “know” they were so well hidden by the seasonal lushness? I have to ask them….)

In the snowstorms of February, the nest often wore a cap of snow twice its own height. It blew around as the branches in the winter winds. The nest never detached.

And now, it is March; the dirtiest, nastiest month in my calendar. Old Man Winter throws the last of his messy, snowy arsenal at us. Never enough to snowshoe in or otherwise enjoy. Just enough to be plain mean. Spring tries to break his grip: she occasionally comes through with a balmy day or two: just enough to tease us into hanging in for the promise of April. Really, if it wasn’t for St Patrick’s Day falling in March, I would seriously consider mounting a campaign to ban the month from the calendar.

And yet, in this month I detest, my little nest is giving me such great hope! I look at it each day, still marvelling at the engineering feat that allowed it to survive rain, snow and wind. I imagine the return of the robin family and hope I was a good enough landlord to have them choose my lilac bush again.

The cliché of spring as a time or rebirth is tried and true. The cycle of life continues and is epitomized by the return of the robin, the blooming of lilacs, the melting of the last of winter’s much maligned but life giving moisture, the drying of roads and the greening of fields.

But perhaps the most “felt” sign of that cycle for us northern humans is the leap in our hearts as days grow longer and warmer. As we once again open our windows and our eyes, rejoicing in the renewed life all around us.

And we answer the call to step up to our place in that cycle.