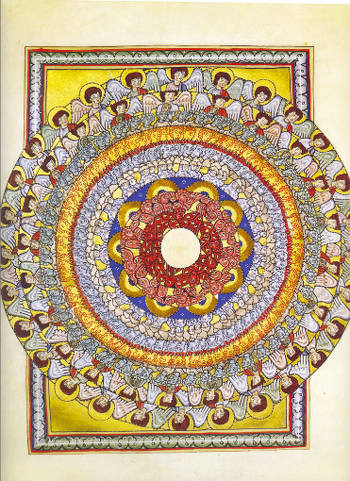 “In  the thirtieth year, in the fourth month,
on the fifth day of the month,
as I was among the exiles by the river Chebar,
the heavens were opened, and I saw visions of God.”  — Ezekiel 1:1

To read Ezekiel you need mind and heart engaged.
He is a seer, a visionary.
He is a prophet who knows the limitations of words.
He is an actor who uses drama to disturb and console.
He picks the ordinary to point to the divine.
His themes are community, judgement, and the presence of God.
His visions warn and they also comfort.

I think Ezekiel fell in love with God when he was taken captive and sent into exile.
Without a temple and the holy city, he came close to God anyway,
and God came close to Ezekiel.
There was nothing between them.
There aren’t words for that. There are images and metaphors.
There are chariots and wheels, and wheels within wheels
there are living creatures, fire and lightning.

Ezekiel is a mystic.
He opens the way for all who see God
and then struggle to describe the energy of such an encounter. 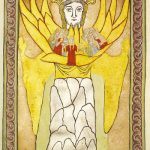 Like the Jewish mystics of the Kabbalah tradition who
experience the essence of God.

Like Hildegard of Bingen, the extraordinary 11th century saint
whose intricate illuminations illustrate the God of her experience.

What about you? Have you seen visions of God lately? All it takes is looking around with the eyes of the heart.

“Blogging one verse from every book of the bible.“